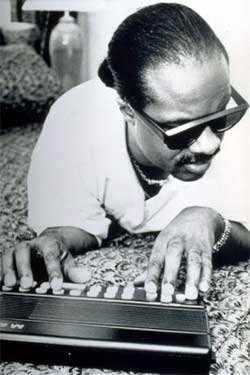 Comments:
Stevie is so utterly totally beyond trans-awesome.

Thanks for giving Stevie his due -- he fits right in here. And even though I JUST CALLED is a low, low, point, it still has a vocoder bridge!

They're not 80's Stevie (and neither is the linked David Frost footage ;-), but don't forget the Stevie on Sesame Street appearances. I was - and still am - a HUGE fan of the song + talkbox performance of "1 2 3 Sesame Street". Both clips got occasional play 'til like '78 or so - view 'em here.

What about the cameo on The Cosby Show around '84 or '85, I think. He introduced the Cosbys and much of America to samplers. Bill Cosby sampled (iirc) "Baby" and then they scaled it across the keyboard. That was Stevie, wasn't it? It's a faint memory.

true, Stevie should be in here - I remember reading an interview with Stevie Ray Vaughn talking about meeting Wonder, walking into the room and finding Wonder with a synth, plugged in, with the cover off, rummaging around in the guts of the synth, chatting away with SRV while he fiddled with the circuitry. that's hardcore.
- housepig

It was Stevie (on the Cosby show). I'm pretty sure the sampler he used was a Synclavier.

Not sure if they're bringing TONTO with them though...

That Cosby show performance was amazing - he gets each member of the family to say something and samples part of it. He gets the youngest daughter (Rudy?) to make the noise a giraffe makes, asks the next daughter the name of the boy she likes.. can't remember the rest, but that blew me away at the time... That 'Close To You' rendition is ace.