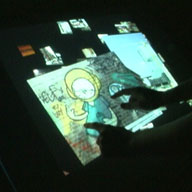 This talk at TED from Jeff Han, research scientist at New York University's Media Research Lab, is an incredible demo of multi-touch interfaces. Jeff's demos go way beyond what the Lemur can do, and suggest a load of exciting musical possibilities. (via Boing Boing, with Jeff previously featured on CDM)
UPDATE: All your multi-touch news desires can be satisfied by Chris at Pixel Sumo. Posted by Tom Whitwell.

I got my hands on a touch screen and use it as a second monitor on my music PC.

I wrote a drum grid editor thing (inspired by those little LED-button-covered boxes you reported on) that syncs with a midi device..

Anyhow, it's very cool to use.. crappo pic here

If you were referring to the drum thing I posted a pic of above, ta!

It's totally free if anybody else has a touch screen and wants it (it'll work on a non-touch screen too, of course).

I use it with Tracktion 2 using Maple's freeware virtual midi ports.. should work with any sequencer that can sent midi clocks.

wondering how it would work with tablet pc.. I have q1 which doesn't really have good screen res, but does have touch support.

You can get it at http://www.froggyfrog.com/music/gcontrol.zip

Email me at Godzilla@froggyfrog.com if you get stuck :)