SenseSurface: Attach knobs and sliders to a laptop screen 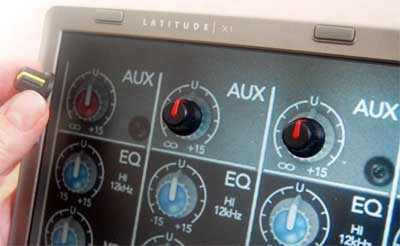 The mockup image looks like a hoax, but it isn't. SenseSurface is a prototype system that lets you connect real knobs and sliders to any LCD screen. An x/y sensor matrix clips onto the back of the screen and attaches by USB. The sensor can pickup the position and movement of knobs attached to the screen (it's not clear how they're attached, but even a suction cup might work OK). The first prototype video shows the proof of concept. There are lots of questions (How do you close your laptop when it's covered in knobs?), but it's a nice idea - you could buy a cheap 19" second monitor and cover it in these things... (Thanks, Nick - via) Posted by Tom Whitwell.

Comments:
Awesome idea. Shallow knobs and slightly larger offsets near the upper edge of the monitor would allow for partial closing of laptop, which would suffice for lugging it around in a bag. Hope they can pull this off at a reasonble price (and that the hardware that mounts to the back of the screen has an integrated USB hub; those ports are gold on small laptops.)

This could totally be done without the sensor on the back, if you're willing to aim a webcam at your screen. It would work on the same principle as "I eat beats". Either way, nice trick.

this is great, although all I can say is arrgggh, simultaneous invention: I thought of this about 2 years ago. I'd be happy to see someone make it a commercially reality though rather than just a day dream and sketches (unlike me). I have a Remote SL and I feel like I am the only one who thinks that it sucks, you can hardly say the Remote has 'massive displays' (novations marketing hyperbole) compared to this concept. I'll buy one.

I remember looking at a patent filing by Apple from maybe a year and a half or two years ago with similar concept, except the sensor was built into the display itself. I think the idea was that you would use overlay plates and the computer would identify which control you'd put where and build the virtual interface to match. Neat idea.

Studer already has a patent for a user interface very similar to this. It premiered on their Vista 8 console and has trickled down to other products as well. I picture of their implementation is here:

why would there need to be multiple knobs? just one knob that acts as the physical interface/controller would more than suffice. ok, maybe two. most people only adjust one at a time but some people DO use both hands. until we develop a third hand (please avoid third-leg jokes), we only need two knobs as controllers for this technology. it would require less materials and cost less for consumers this way too. so, more accessibility for consumers, lower price and less consumption and pollution to the environment in which humans live.
maybe the designer of this will read and agree?

True enough. Once you get down to one or two knobs though you might as well just have a touch screen (to tell the system what you want to adjust, and one or two of those big-ass USB jog wheel things

this is a really cool idea, would love to get my hands on it but it's the last thing i need right now.