The eternal challenge of guitarist's fingernails 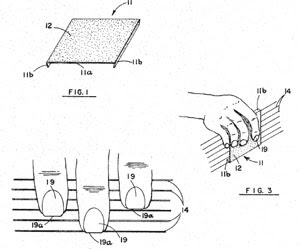 The strangest stand at the London Music Show was Amazing Nails 4 Guitarists, a tiny company run by "international celebrity manicurist" Midge Killen. She does Paul Simon's nails when he's in London, is a technical advisor for the London International Guitar Festival and holds a regular nail clinic in California for her US clients...
More than you ever wanted to know about guitarists fingernails:
1. The four basic methods
2. Many pages of The Guitarist's guide to fingernails
3. A 1969 patent for Method and apparatus for filing fingernails of guitarists, banjo players and the like
4. The history of guitarist fingernails 1554 - present
5. Creepy guitarist manicure masterclass on YouTube. Posted by Tom Whitwell.

Comments:
the first classical guitar lesson i ever had when i was in college was devoted entirely to nail care. we didnt even touch the guitar during the lesson. its a pretty serious deal in the classical guitar world where tone color / control is so important. i also think fingerstyle guitar sounds alot better with fingernails than without.

Thanks for these posts. I didn't even read them yet. I am a nail-challenged guy as I play with fingernails but my right middle finger has a weak nail which wears down or breaks very easy and then I am scuppered for a week or two till it grows back.
The consensus a few years ago was that Revlon's "Strong Results" was the primo nail hardener, but I could never keep up the applications.

when i used to play classical, my teacher stressed the importance of using super fine grit sandpaper, i think 1500 grit. nothing's worse than that abrasive sound of even ever so slightly rough nail edges. regarding the whole flesh versus nail thing, have a listen to steve howe (of yes), he plays with the flesh of his fingers, and his tone is amazing. i don't know if there are any yes nerds around here, but the movement of The Ancient (Giants Under the Sun) about 13 minutes in is steve howe's classical composition at its finest, and his tone is so sweet and warm.
check this video out: http://ca.youtube.com/watch?v=PNsbtnMeGbU