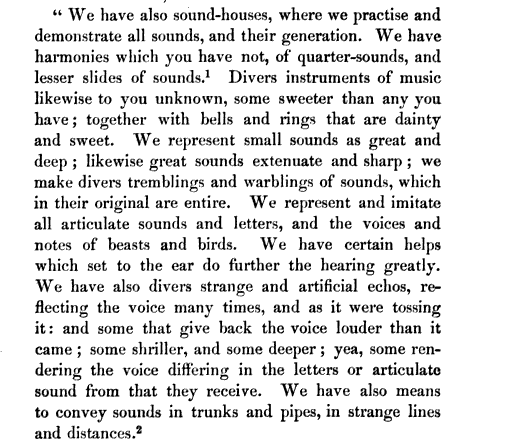 If you can get hold of a copy, I recommend the April 2008 issue of Sound on Sound, which includes Steve Marshall's epic 12 page history of the BBC Radiophonic Workshop, which was founded 50 years ago in April 1958.
His piece is full of goodness, but the thing that really amazed me was this "We have also sound-houses" quote from Francis Bacon's 1626 book 'The New Atlantis', which Workshop founder Daphne Oram had pinned on the wall of the Workshop. It's all there: "We represent small sounds as great and deep" = Waves Ultramaximiser, "We represent and imitate all articulate sounds and letters" = a circuit-bend Speak'n'Spell, and "divers tremblings and warblings of sounds" pretty well describes my entire musical output. Posted by Tom Whitwell.

Comments:
The last sentence is the one which amazes me most. It's a casual little rascal of a prediction describing the transmission of the audio path via tubes (wires? teh intertubes?). Pretty amazing that he's foretelling such a practical application before its root technologies (harnessing electricity, and using it to encode signals, etc.) themselves were even conceived...

"It's like finding a 747 three hundred years before the Wright brothers even flew." Ahh, "Highlander." It's got movie quotes for all occasions... :o)

oram was a tenacious researcher, interested in all sorts of stuff. i may be wrong, but i think she was the person who first brought this quote into the context of music and composition. it's wheeled out regularly these days by sound artists looking for a bit of dark-ages cred.
her book is a very weird collection of autobiographical anecdotes and a sort of pick-n-mix ersatz mystical belief system with electronics thrown in.

The New Atlantis predicted way more than this (plastic surgery, genetically modified foods, etc), though this passage is by far my favorite. This passage in particular has been a favorite of many electronic great, not just the BBC radiophonic workshop.