Vox Amplugs: A teeny-tiny AC30 to plug into your guitar 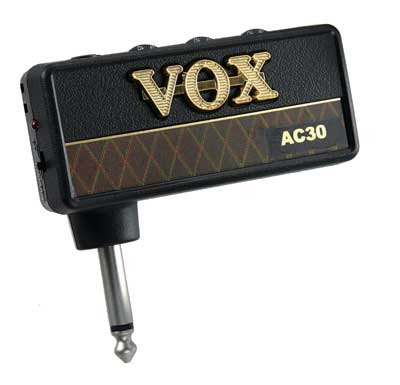 This is quite cute - Vox are doing a range of little headphone amps - one based on the AC30 with top boost, 'Classic Rock' based on a Marshall and 'Metal' based presumably on a Mesa Boogie. The circuitry is analog and runs on 2xAAA batteries. No idea how they sound, but they're quite nice looking. Disappointingly, they all look like AC30s, just with different stickers. £35, further bumpf at Vox website.
Incididentally, what is it with copywriters for music gear companies? They claim: "amPlug perfectly reproduces the complex and warm distortion that is distinctive of a vacuum tube... amPlug delivers full-fledged amp sound that will revolutionize your guitar playing." Both of these claims are clearly lies (the 'perfectly reproduces' and the 'revolutionize your guitar playing' bits). What was wrong with: "Sounds OK, looks OK, costs £35, what's not to like?"
AND ANOTHER THING: If Vox are going to put a Union Jack on their homepage and a London bus on their news page (despite having being owned by Korg since 1992), they should probably learn how to spell 'revolutionise' properly. Posted by Tom Whitwell.

Comments:
Its monday and no mistake. :)

It doesn't look Strat-friendly either, does it?

I have a blog which is completely full of entertainment like movies, music, ringtones etc.

I look forward to reading your blog good sir!

I think that vox thing would be good for playing guitar while driving.

May be Tom should get a new spell checker or revert to old fashioned
dictionaries made from paper.

Revolution (ize), (ise) can be spelt either way.

(despite having being owned by Korg since 1992) What's so bad about that?
Any way they do have an R&D facility in the UK where this stuff is designed.

It also appears that they are very Strat friendly. I've seen a picture
of an AmPlug in an old bashed up Strat.

Well that's alright then. From the pic it looked like it might not fit too well into a recessed Strat-style jack socket.

Yes revolutionise (ize) are both correct, but like he said they website has a more British flair to it and they used the chiefly U.S. way of spelling it rather than the U.K. way (ise).

Interesting how you used the word spelt, which according to m-w.com is pretty much only used in British style English and virtually non-existent in U.S. style.

All valid points you make there Tom, imho.

i listened to the audio clips on the vox website and it sounds pretty decent.

I can only wish that you'll understand the kind of approval process that copywriters have to go through. The final draft is usually a pale shade of our desired draft due to various factors.

Try selling that to the client. They're never gonna buy that. I'm just saying...

Yep.. odd as it is and strange as it may seem, -IZE is British Ingerlish, and -ISE is US English.

I thought our dear host was a British Gentlemen, but perhaps I'm mistaken or he can't spell properly (for his region).

Yes Mike it is monday, i hate mondays lol. Anyway i love this blog. I love music, fullstop. Keep up the good work.

They do sound quite good. Not sure where a reverb would go, mind you...