Practice in front of a bush: Captain Beefheart's rules for guitarists 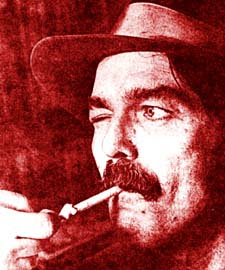 One of the best things ever...
Captain Beefheart's Ten Commandments For Guitarists
1. LISTEN TO THE BIRDS That's where all the music comes from. Birds know everything about how it should sound and where that sound should come from. And watch hummingbirds. They fly really fast, but a lot of times they aren't going anywhere.
2. YOUR GUITAR IS NOT REALLY A GUITAR Your guitar is a divining rod. Use it to find spirits in the other world and bring them over. A guitar is also a fishing rod. If you're good, you'll land a big one.
3. PRACTICE IN FRONT OF A BUSH Wait until the moon is out, then go outside, eat a multi-grained bread and play your guitar to a bush. If the bush doesn't shake, eat another piece of bread.
4. WALK WITH THE DEVIL Old delta blues players referred to amplifiers as the "devil box." And they were right. You have to be an equal opportunity employer in terms of who you're bringing over from the other side. Electricity attracts demons and devils. Other instruments attract other spirits. An acoustic guitar attracts Casper. A mandolin attracts Wendy. But an electric guitar attracts Beelzebub.
5. IF YOU'RE GUILTY OF THINKING, YOU'RE OUT If your brain is part of the process, you're missing it. You should play like a drowning man, struggling to reach shore. If you can trap that feeling, then you have something that is fur bearing.
6. NEVER POINT YOUR GUITAR AT ANYONE Your instrument has more power than lightning. Just hit a big chord, then run outside to hear it. But make sure you are not standing in an open field.
7. ALWAYS CARRY YOUR CHURCH KEY You must carry your key and use it when called upon. That's your part of the bargain. Like One String Sam. He was a Detroit street musician in the fifties who played a homemade instrument. His song "I Need A Hundred Dollars" is warm pie. Another church key holder is Hubert Sumlin, Howlin' Wolf's guitar player. He just stands there like the Statue of Liberty making you want to look up her dress to see how he's doing it.
8. DON'T WIPE THE SWEAT OFF YOUR INSTRUMENT You need that stink on there. Then you have to get that stink onto your music.
9. KEEP YOUR GUITAR IN A DARK PLACE When you're not playing your guitar, cover it and keep it in a dark place. If you don't play your guitar for more than a day, be sure to put a saucer of water in with it.
10. YOU GOTTA HAVE A HOOD FOR YOUR ENGINE Wear a hat when you play and keep that hat on. A hat is a pressure cooker. If you have a roof on your house the hot air can't escape. Even a lima bean has to have a wet paper towel around it to make it grow.
(Via the inestimably great Analog Industries)
Posted by Tom Whitwell.

Comments:
The original quote was from the Fat Man's site: http://fatman.com/gameplay.htm

The whole site is well worth a look. It makes you feel good about Texans, which has been difficult to manage in recent years.

I now understand what I've been doing wrong, and simply just not doing. Thank you.

One of the great poets of our time, probably the last of the true beatniks. Love the Captain.

"If you don't play your guitar for more than a day, be sure to put a saucer of water in with it."

There's a kernel of truth in all of the Captain's rules... except, I really can't say I understand the reason for the saucer of water. Humidity maybe?

" I really can't say I understand the reason for the saucer of water."

It's totally impractical. So I think it's a way to say Play your guitar very day.

Or maybe also to say, treat it with love and respect, like a living thing that flourishes when you give it your attention and your interest.

The one I don't quite get is about the bush and the bread.

The bread and bush thing makes perfect sense to me, but I can't explain it, even though it makes me chortle with glee!!

This and David Fairs how to play guitar http://www.halfjapanese.co.uk/how-to-play-guitar.php
need to be read by musicians and non musicians alike, as they are both a little off center, but are inspiring, and really relevant to playing music, and expressing oneself.

Beefheart is well known for making guitar playing all about measuring your manhood. Every one of his guitarists were inundated with "rules" that made playing for him pure hell. "You can't use them wimpy strings, you gotta get the heaviest, rustiest strings I can find."

Don't these commandments imply he's the only one who really has it figured out? All great crap has a kernel of something in it even if it's just corn.

If that works for him, fine. Bach used his brain alot in the process, and noone's saying his stuff sucked.

If you're any good you can make rusted strings and loose frets sound great. But you have to be good at playing and listening.

"If you're any good you can make rusted strings and loose frets sound great. But you have to be good at playing and listening."

Regardless of your ability to make music on damaged equipment, recommending to others that they purposely do so is unconscionable. That would be like VanGogh telling people that if they want to be a great painter, they should cut off their ear and catch Gonorrhea.

Jerry Lee Lewis: Wanna be a great piano player? Set fire to it!

I like the Cap as much as the next guy, which is why I am well acquainted with the horror stories his guitarists tell. However, when I'm done admiring the music, I also have to say, you're "Divining Rod" won't find many spirits if you don't bother to learn a basic Pentatonic scale. There are darn few people who can just sit down and not worry about what key they're in and never need to learn a scale or some basic theory. (That darn brain again...)

'don wanted it to sound harder, harder, harder,' says bill. 'my fingers would be a bloody mess, but i didn't complain. i was nineteen, my two favorite artists were zappa and beefheart, and i was just glad i didn't have to go to college or join the army and die.'

the band shared a house in suburban woodland hills, a scenario bill recalls with bitterness: 'the side of the music that most people don't want to hear about is how manipulative this older guy was with these 19-year-old kids. it was only ten yards short of a manson (leader of a notorious cult commune - t.t.) situation. we would play twelve to sixteen hours a day, fall on the floor, and then wake up and do it again. our hero was a brilliant person with half his energy running on extreme paranoia. he would talk to us for 36 hours straight, telling us that our hand position in the air wasn't artistic enough.'

P.S. The Guardian just recently had a nice writeup on "Trout Mask"...

"I am not sure I even like it as music."

A guitar should be treated as if it were your only real friend and lover. Just ask the likes of Segovia, Clapton, BB and Freddie King. The more love and care you give it the more it shows in what comes out of it. Bee Fart is obviously too lazy to pay any attention to his axe. His philosophy on the care and treatment of the guitar shows he doesn't give a damn about anything except being the big Bee Fart.

People certainly take some funny, inspiring, jokey "rules" (that Beefheart may or may not have even actually written, never seen a verifiable source for these) VERY overseriously on the internets.

Ahh, everyone knows, truly, that it's important to sometimes play in front of a bush while eating multi-grain bread.

But, yea, there's something to be said for the next note sounding planned and note like you're trying to not die of asphyxiation...

this is awesome, i keep my hat on like a plug.

I think people either take this all too literally or too light heartedly. Some of it can really mean something, while other parts are a little more representative... Either way, he makes good points, bluntly, or hidden.


But.. but... GuiTarget DOES sell instruments with rusty strings. At least most of the ones I've picked up have cheese grater frets. Hmmm... the 'Captins onto sumthin...

FYI, you must leave a saucer of water when not playing for more than a day because the guitar will get thirsty during that time, just like a cat would.

Sorry kids, this is not Beefheart originated

Some people will believe anything.

Some hack obviously made it up.

Where's the date and source info?!

Some of these comments were posted by some real dick wads who wasted their time pointing out how ridiculously seriously they take themselves and wasted my time by making read it. Here is a quote by someone (it matters not who)"Some men are alive only because it is illegal to kill them."

Bach didn't suck, but he also didn't use his brain as much as you think. Tonal Harmony music theory was still undefined until after him. His music defined it, but he wasn't as aware as you apparently think he was while he was composing it. And to anyone who think damaged, misused instruments don't sound good, wake up and listen to some 20th century composers. Maybe John Cage, Henry Cowell, Z'ev, I don't know. Innovative use of traditional instruments is one of the few things still pushing music forward. Don't suffocate the progress.