Blind man living in Iran makes music like everyone else 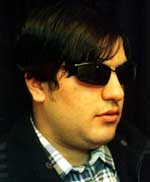 Amin wrote to me about his friend Aboozar. Aboozar lives in Mashhad, Iran's second city, close to the borders with Turkmenistan and Afghanistan. It's a pilgrimage centre, built around an enormous shrine. Aboozar is a traditional musician, who is almost completely blind, but he's found ways to use his computer to make dance music. You can hear his tracks here at his UK-hosted website. Amir says "he has problem with religious atmosphere in his hometown, Mashhad, which depicts music as an unholy thing." What's interesting about Aboozar isn't that his music is great (it's rather generic Euro-trance), or that he's doing it in a clever way (he uses the not-so-great Dance eJay 3 software). It's that Aboozar is pretty much exactly like you or me, which you don't alway hear about Iranians... Posted by Tom Whitwell.

Comments:
I guess you don't a lot of PLUR from the religious police. Wow, can you imagine 'Western dance music' as actually being a threat to society? (remember the cops in Footloose...) Oh and pizza. Did you hear how the Presidentt of Iran banned the pizza to be replaced with the Persian equivalent of 'elastic loaves'? No telling what they'd think about synthesizers named 'little phattys'.

Go Aboozar! My music ain't too holy either.

Sean Penn said on Larry King Live recently, that of all the folks he's met in the mideast, the Iranians are the most 'American-like' AND the strongest believers in the separation of church and state.

Sadly, Sean didn't have anything to say about generic Euro-trance.

How can we get a Jihad against Eurotrance?

Who do we talk to to get BT and Scooter on the hit list.

Realising that most people there are the same kind of lame eggs as we have here would either end the war or totally throw it into high gear.

The most disturbing point to me is, of course, the continued use of Ejay?

i think the most amusing aspect of this whole thing is this:
"Buy more than one track and you can request the gift of free invitation to Gmail (Google Mail) with more than 2.7 GB free inbox space, POP3 access and many more useful features."
brilliant! a gmail invite in addition to generic euro trance!

Yeah, Eurotrance is so over, but hey, think about where he is. Hell, I live in Oregon(USA, just in case!), the Southern part, and people here would think it was something new if they went to a club and it was spun!

I like the idea of music being a threat to society, we really need to bring that idea back, and actually utilize it!!

Funny thing is, somewhere in America, actually many places in America, their would be civic and religous leaders who felt the same way, about music threatening the moral code, they need a blast of something sonic!

Um, he's not just like us. He's BLIND. Go ahead, close your eyes and make some generic Euro-trance with crappy software and your eyes closed. Go ahead, since we're all pretty much the same.

There are two important elements to this story. One is that the Iranians - despite their repulsive, repressive government - are a very educated, energetic, capable, sophisticated people.

The other is that he's blind.

An email conversation would help you learn/share how blind people make Euro-trance music in Iran. But that would be a lot more work than just missing the point, wouldn't it?

I read this 'story' and then I farted. That makes me just like everyone else... and I used the same equipment.

Check out Persepolis by Marjane Satrapi. A graphic memoir (as in comic-book format for adult consumption) of her childhood in Iran, late adolescence in Austria. Orig. in French (she lives in Paris now), the English translation is what I read.

She was there during the Revolution/rise of the Ayatollah/war with Iraq. No Eurotrance compositions, but very worthwhile.

on a slightly related note i was trying out speakable items and voiceover in os x over the weekend - anyone find the speakable items useful for controlling logic? i was thinking it could probably change effects based on song lyrics.


Rendwich,
yeah he's blind. We all noticed that. Are you blind?

I'm sooo tired of people always yelling at me "GO AHEAD CLOSE YOUR EYES AND MAKE SOME GENERIC EUROTRANCE!" - its every day with that shit. Please.

The ISSUE is eurotrance and ejay software. This is MUSIC THING! He's just like us! He's probably even seen the movie Footloose!

kb - I know, let's find out what Sean Penn's opinions REALLY ARE about generic euro-trance ... because his brother Christopher Penn played Willard Hewitt in ... Footloose!

You see how this all fits together! Somebody should ban this evil!

both plato and 1eonardo argued for government regulated music as it was deemed too dangerous!

What's that got to do with Footloose?

Wait a minute. This must be a joke. He's not some blind Persian, and he's definitely not just like us. He's John Belushi. It's bleedin' obvious.

(How does he make Eurotrance with no eyes? Does he have one of those Braille displays? This would be easier to believe if he were deaf.)

seriously, though...
there is some chance that America will eventually have some sort of "showdown" with Iran<
reading this makes you realize that the countries we fight with are full of people who have no part in the fight<

Okay, what exactly was the point of this post? "Iranians are people! Just like us!" Is this Team America or something? Embarassing.