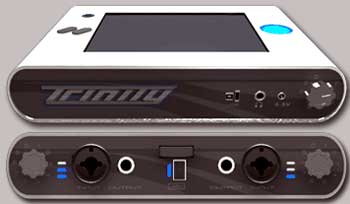 I'm not 100% convinced by their claim that it's "the world's first professional, portable, recording studio", but the Trinity DAW is certainly neat: A self-contained handheld unit with a screen, 500mhz processor, 128mb memory, 20gb hard drive, mic inputs with phantom power. It can run Audacity, which is an open-source audio editing program, a bit like Soundforge. It's $999, which isn't cheap, and obviously it's only renders at the moment (though they're billed as 'close up photos' on the website). More here at linuxdevices.com. Posted by Tom Whitwell.

There's no good audio recording or editing software for Linux. There's a lot of half-finished VST frameworks and a few proof-of-concept user interfaces which happen to have some audio editing capability behind them, but they all suck.

I gave up on Linux for Audio.

Even the acronyms are brutal. LAPSDA? (Linux Audio Developers Simple Plugin Architecture). How gross an acronym is that?

I bought a laptop card that is supported under Linux (echo IO), but lord if I can get it running. I installed Ubuntu, and then had to install the ALSA framework, and compile the damn thing, and then found the modules still wouldn't work, etc.. etc... It really isn't good.

The funny thing about Linux Audio is that it hasn't gotten any easier from a user perspective in a long while.

If you're new to Linux, it's near impossible to understand what's going on. (I'm not new to Linux, been running it forever on servers).

BTW, I tried all this Linux stuff again because I wanted to try Ardour.

It looks better than Audacity. Also I think it may supoprt LAPSDA and it does support Jack, so in theory I could route my recordings to Mac and PC with realative ease.

Besides the Linux factor..

I use Sound Devices and Microtracks for field recording, and mix on a desktop, which for 99.99% of people, makes sense.

The sub-group that would require such a minimalistic recording/producing setup is limited to a backpacking solo broadcast journalist.

I'm just not sure how this wins vs laptop, except in weight. 2 tracks, no XLR or Hirose power adapter to hook up NP-1 packs for serious battery life, no digital in/out, etc..

WTF? Linux Audio Software actually works. It's maybe not as easy to use as on WinXP and you need to understand your computer(!), but i can't imagine running such a device with WinXP... well there's WindowsEmbedded, but try to find some Aufiosoftware for that... that's the main difference - linux is flexible and audacity might be more userfriendly than some roland recording box.

Ardour, Rosegarden, and lmms are all excellent audio packages. I don't know why they chose Audacity as an example, either, because it's way behind and lacks some major features. I think it just happens to have name recognition.

The Linux part makes some sense. I think the more significant problem is whether a laptop would be more useful and a better deal. (or a tablet PC, etc.) You could run Linux, Mac, Windows, whatever you wanted.

Some details:
http://linuxdevices.com/articles/AT6071673793.html
it needs to get a midi interface! but it's got wireless lan and supports even more tools: ecasound, hydrogen, webbrowser^^

i think that the idea is cool, but for $999 the software needs to be better than audacity

however i can't blame them for using linux...at least its not windows :)

Linux is for people who buy Habitat furniture, listen to James Blunt and vote for the Liberal Democrats...

both links seem to be pointing to audacity?

I had Audacity on my crap-ass origional Imac with OS 9. Truly terrible. I'd much rather shell out a few hundred more bucks and buy a laptop. If this thing ran Pro Tools it would be a different story.

-Actually Audacity 1.3 is quite impressive as a multi-track app.
I know, the older versions were
not so great!
-Trinitys' transmission software looks to change the opinion about linux and linux audio. LADSPA is quite fine!
-Ardour was considered by Paul and I but the GUI was huge! Rosegarden is too memory hungry.
-YES XLR
-The point of Trinity is to allow an audio engineer to the ability to take your work with you. Your home PC DAW stays at home!
-umm guys I was there when S/pdif was hailed as a big stink and believe me it never was, still isn't.
-We surely cannot put every feature on a small form factor. We chose the ones that count as primary.
-Battery packs Whoa! come into the 21st century! - who needs battery packs when you have (2) Polymer Lithium Ion 4200 mah slim batteries.
-There is an extra USB port to plug in a USB based midi interface.
-Power and room account for many design decisions

Okay, I just spent a few hours with Audacity on Windows (not Linux hehe).

It worked great with my MOTU Traveller, and let me monitor through another sound card with ease.

The FFT analyzer was useful in tuning some noise in my studio (just rewired --- AGAIN).

Audacity is getting pretty good these days, I agree.

I use it as a soundforge replacement, it has 99% of the features I need.

I have never tried the hardware but I use Audacity all the time and I have to say I think it is really quite good.

One theing is for sure and that is the price is right!

Until Audacity supports nondestructive block editing it will always be a toy.

Also, my experience with the OSX version has always been bad; it's crashy (when doing such complicated things as recording a clip or playing it back or trying to save it), it likes to repeatedly set my sound driver (at the system level) to the lowest quality settings every time it reinitializes (which is constantly), and like, okay, I guess it's pretty good for free, insofar as it's better than a free kick in the face.

No matter how good Linux-based audio apps get, it also seems as if Linux itself has such a horrible driver architecture. Yes it's all easy to program (until the next version of the kernel comes out and all your ioctl()s break) but it's very low-level, the "high-level" APIs are all pretty low-level but put in useless abstractions which don't help while not actually abstracting things which need to happen (and also adding a hell of a lot of latency), MIDI support has always been a complete joke, and of course there's two major competing standards to choose from (OSS and ALSA), both of which have major problems (though at least ALSA is free).

Also, thank you "anonymous" for "WTF? Linux Audio Software actually works. It's maybe not as easy to use as on WinXP and you need to understand your computer(!)" as I am a software engineer with many years of programming experience on quite a few extremely different platforms and a master's degree in Computer Science. I'm pretty sure I understand my computer, thanks. Just because I understand exactly in what way something sucks doesn't mean I want to use it.

"I installed Ubuntu, and then had to install the ALSA framework, and compile the damn thing, and then found the modules still wouldn't work, etc.. etc... It really isn't good."

Huh? Ubuntu comes with ALSA, you don't need to build it yurself. Also, most of the audio apps can be installed with one click from synaptic.

Use a audio software live CD like fervent or dynabolic or Musix etc if you still have problems.

"MIDI support has always been a complete joke, and of course there's two major competing standards to choose from (OSS and ALSA), both of which have major problems (though at least ALSA is free)."

Poppycock. OSS (free) is deprecated and will be removed from the kernel soon. ALSA can emulate it for compatability with old apps.
The commercial OSS is little used.
I don't see a problem with midi, you just route it in qjackctl the same way you do with audio.

That's the entire point of Jackd. It works on Linux, OSX and soon to be Windows and allows programmers to not care about the underlying driver architecture.
Any serious Linux audio app supports Jack.

"Until Audacity supports nondestructive block editing it will always be a toy."

I agree. Thankfully 1.3 will support it.

Perhaps. You don't appear to have tried Linux however.

> Linux is for people who buy Habitat
> furniture, listen to James Blunt and
> vote for the Liberal Democrats...

I wish linux rocked for audio. I have yet to see that. I tried it for a while, but there is a serious lack of linux audio editors that are as powerful as Nuendo, Cubase or Logic. There is also a lack of great sounding plug ins like compressors. If I'm wrong, please correct me. And how about how end audio recording interfaces. I would be happy to try it again if you could point me in the direction of all of the above.

Audacity 1.3.3 beta is pretty powerful and easy to use, and Ardour is even more powerful, though at the expense of usability. Obviously neither can compare to ProTools HD, but they both blow ProTools Free out of the water.

Compared to other handheld devices (digital 8-track recorders, basically), this seems to amazing.