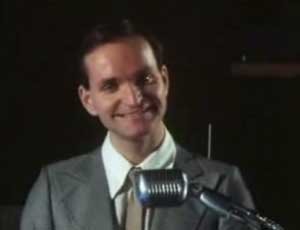 If you've ever wondered how an average Music Thing reader appears to the general public, watch this incredible video of Kraftwerk performing 'Autobahn' 21 31 years ago in September 1975, complete with a voice-over from a British TV presenter explaining how "Next year, Kraftwerk hope to eliminate the keyboards altogether, and build jackets with electronic lapels, which can be played by touch." Satire, in the form of Synthesizer Patel, doesn't seem nearly as funny... (Thanks Joe) Posted by Tom Whitwell.

Comments:
I remember this clip. It was originally shown on "Tomorrow's World" (a BBC science programme looking at the latest inventions, etc) and was later included as part of the BBC's "Sound Of The Seventies" series. It has to be said, Kraftwerk were a lot more interesting to watch back in the days when you could see them ACTUALLY doing stuff.

Oh yeah, and Florian smiling... When was the last time that happened?

I think he demonstrates quite adequately why he doesn't smile at the end of that clip.

I remember this very well, I think it was the first time I realised I wanted a synthesizer.

The othe Tomorrow's World musical instrument I remember was a prog-rocker who'd built a fretless bass out of plastic drainpipe and some sort of resistance strip. Does anyone else remember this and if so who was he and what was it?

Jim - could it have been this chap?

Tom, thanks! That's exactly the thing. I even remember the bit about it being nearly ready for production. I was about seven or eight I think when appeared on Tomorrow's World and it's stuck with me ever since: I still want one. Prog-rocker might be a bit crule, but that is a hell of a poncho.

BTW - Kraftwerk is f*ckin awesome band.. one of my favorites

I still listen to "Trans-Europe Express" all the time

i heard in their very early days they were more of a krautrock type band, but never really checked if any recordings or such exist... anyone else know more?

Yeti- I just recently got "Kraftwerk 2" (brilliantly-inventive title for their 2nd album); I think it's from 73 or so... there is hardly a synth to be heard on the whole record. It's mostly electric bass and tape manipulation, by the sound of it.
Well worth a listen if you think Kraftwerk == modular sequences and syntoms.

Yeti, type "krautrock" into youtube, sit back and wonder


Also, they've got CAN doing Paperhouse. Excellent. I never knew farfisa made so much stuff!

The first couple albums (Kraftwerk and Kraftwerk 2) were released in 1969 and 70, I believe. There's some weeeeird stuff on thems. The theme from Newton's Apple was from them, for any 80's US PBS viewers out there.

More proof for MT's contention that white synths are the snazziest.

Does anyone have the theme to Tomorrow's World? Bup-bup-bup-ba-baaaa

Jeez i'm glad they X'ed the bongo guy in Orgaisation. Can't imagine him with the L.E.D. tie.

Does anyone have a clue what the white and black knobbed synth is in the video? I spy a minimoog, a white odyssey (or something ARP), and a third which gets its knobs tweaked throughout the video? Any guesses?

I hereby throw down the electronic lapel MIDI controller gauntlet. Someone build this, please.

I've loved Kraftwerk ever since I picked up Trans-Europe Express on vynyl at a thrift store for 25 cents.

jackets with electronic lapels,
- sounds like Peter Blasser's old wearable synth which can be seen towards the bottom of http://www.ciat-lonbarde.net/crowns/index.html

I have their first album 'Kraftwerk' and they are definitely very Krautrock, all mainly processed gtr, violin, flute & drums. Very much like Godspeed You Black Emperor or like, except 30 years before that.

Even in the original recorded version of 'Autobahn', you can hear quite plainly the guitar and flute.