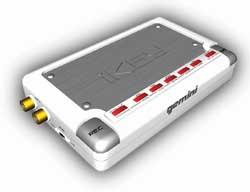 At the moment it's nothing more than a slightly half-assed looking render, but the Gemini iKey still has the power to confuse me. The press release (on Harmony Central and Gear Junkies) suggests it has no on-board storage. Instead, you plug it into a separate USB drive and it will record audio (as wav or mp3) there. No word on whether it can play back the audio, or sampling rates. No sign of mic preamps, let alone phantom power. The press release says "Never before has a portable device allowed you to do this without extra hardware and software." Intriguingly, this particular unit appears to be useless without... extra hardware and software. It's $229, it looks pretty, but I don't see what it does that a Edirol R-1 or a M-Audio Microtrack wouldn't do in one box (admittedly at almost twice the price). UPDATE: Remix are reporting that the iKey will cost just $29. It's almost certainly wrong (they also link to the iKey keyboards website) but it make me thing that a $50 Behringer version of this box would be interesting - a clever way to turn your iPod into a hard disk recorder. Posted by Tom Whitwell.

Comments:
The preamp question is very important. Because without it it is rather useless (as you would have to bring a separate amp for your microphone), exept for recording from stereos (which seems to be the main idea?).

But imagine connecting your ipod and have unlimited recording time. Great idea.

I actually stupidly paid $350 a couple of years back for a 20gig iRiver which records mp3 on the fly, but the freaking thing stops recording after 5 hours for some dumb reason.

The msrp on this is high, if street is 149 then you have something.

With RCA connections, I think you can be almost CERTAIN there's no mic preamp. If anything, MAYBE they threw in a phono amp -- but I'll bet my iPod they haven't done that, either.

Okay, granted, my iPod's battery life isn't what it used to be and I'd like one of those new color models, but you get the point.

Anyway, speaking of iPods, you could just record unamplified signal into your iPod, no extra gear required. (You just have to install iPod Linux.) Meaning . . . what the heck is the purpose of this thing, exactly? I'm with you on this, Tom.

This is just another one of those greedy "transition devices." The new recorders are expensive, so they thought they could toss in this product at a little bit lower price knowing full well there will be something even better in the near future or they're already working on something to replace it.

It's the same concept as the Laserdisc, or VideoCD, or Zip Drive, or Tivo, or cell phones with internet access, or hybrid automobiles, or XM satellite radio. I can continue if you want...

I still haven't "upgraded" my VHS copy of Fear and Loathing in Las Vegas to DVD because I know there will be some device with no moving parts to replace DVDs in the next 5 years...

Just remember that Gemini is a DJ products company . . they probably expect that if you're attempting to record serious audio, there is going to be a mixer somewhere in the equation.

Honestly, something like this will make it that much easier for me to transfer my minidisc recordings to my computer. I always have to use some software that records the audio from my minidisc through a mic input or something, and the end result sounds like shit . . fook that, mates.

I could definitely use this thing . . new bootlegging tool, kids!

The street price appears to be $149 and at that price it appears to be perfect for recording live band performances or DJ sets . . . Guys! No computer is needed and it's not that expensive.

For the record this is a $150 box that does a whole lot of things. First of all it will allow a DJ or band to record a complete set onto a thumbdrive and then pull that thumbdrive and plug it into a computer and do instant cdrs of their set on the spot. It will also allow technology challenged people to take their old vinyl records and move them to mp3 instantly that can be placed later on their Ipods.

Also no extra software is needed. analog music goes in and mp3 or waves files of your choice come out the other side into a thumbdrive memorystick or USB mini-drive.

Professional Recording in a studio doesn't have much to do with this iKey.
It seems to be developed for the mobile generation, doesn't it ?
I think, it is not a bad idea and a good finishing...
Ohhh damn... I have to record this NOW... plug... >REC<... ready.
If my information is correct, you can adjust the recording volume with a rotary. If you are recording distorted sound, an Clip-LED is flashing.
Congratulations, GEMINI

Maybe you should contact Gemini directly to hear the real deal on the iKEY. This unit is the first of its kind to record your CD's, LP's, Club mixes, Live band performances, Guitar rifs, Sermons and great use for Educational purposes. What ever you record the iKEY will store a file directly on your iPOD and playback without having to use your computer... www.geminidj.com

"not fit for the purpose" under uk trade laws

Bit of a strange machine. The line in jacks are at -10--no mic or RIAA preamps. The input level control is a very tweaky tiny side-wheel pot and the single red level LED is constantly on to indicate no signal or too low a signal. As you increase the input level, the LED starts to blink. The idea is to have the LED blink only occasionally with 3-4 seconds between each blink. Takes a bit of patience!! I've used it in a studio environment for converting tapes of sermons to .wav flies, but I would not be comfortable recording directly to it without better metering. A good interim idea not very well executed. So far, it's doing what I need it to.

BTW, file formats are MP3 at 128, 192, or 256 kbps sampling rates or uncompressed WAV. A big plus is the wide variety of target drives-virtually any USB storage device of any size that does not require proprietary drivers.
I don't think that this device would stand up well under battle conditions- it has a plastic fragility about it. The multiple flashing of the combinations of little red lights takes getting used to. It's not always clear exactly what's going on. The input level is especially hard to judge, with a very small pot.

Sheesh what a bunch of crybabies. This thing is a miracle. In 1996 we paid $1000 to be able to record digitally in the field. Now all you need is this little box. I just paid $107 shipped on EBay.

I plan on using it for live performance recording since my CD burner died. There are endless applications for this device. That technology thing is gonna catch on.
These are the days!