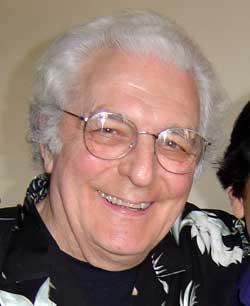 The website Bob Moog's family have put up for checking on his condition has been updated, with news that none of us will want to hear: "There has been a real change today, and it is clear that he will not be with us for much longer... We tried an anti-cancer tea that a loving customer/friend brought from Europe last week, and got what seemed to be a real response for three and a half days. But ...you have to be able to swallow, and now that's becoming really difficult. I feel that the tumor is outwitting us. The next few days will be hard. Please keep us all in your thoughts and prayer." LINK (via) Posted by Tom Whitwell.

Comments:
I met Bob in the mid-1990s, when I was toying with the idea of starting my own music technology company. We only spoke for a handful of minutes, but his advice was, "It'll be hard, but do it if it's what you love." Those words provided strength to found a company. Godspeed, Sir.

The death of a legend is upon us.

I have so much respect for the guy.
The minimoog is the first electronic musical instrument as far as I'm concerned.
There were many devices before it, sure, but none really felt like a single instrument you could spend your life learning.

A truly inspirational man. I was never lucky enough to meet Bob, but his instruments and words have been a real source of inspiration to me and many others.

I'll be powering up my Minimoog Voyager and sending out my thoughts.

He will be dearly missed, and dearly remembered.

Love and strength to him and his family.

It's easy to forget just what this guy did for modern music production technology. Ok, someone sooner or later would have done something similar, but as it is all that came after the original moog synths where in a shadow, they all had his sound to look up to.

Imagine if Jan Hammer had never heard a mini moog? All that Mahavishnu stuff that inspired generations of fusion players would never have been the same. Or how about Keith Emerson? Every cloud eh?

My favorite Bob Moog story was when he had to go on the road with The Who so they didn't destroy, as was their want, a prototype modular "thing" he built.

When you think about the Moog synthesizer and Bob Moog himself, stop and think about how his creation changed not only music, but also had far reaching implications into other fields that are directly unrelated. To this day, his creation still greatly influences even the digital domain of music and other areas whether their doman is analog or digital. Thanks Bob Moog, your creation has changed the world profoundly like the computer did. Thanks for letting other legendary people of academia/music/technology stand on top of your shoulders so to speak because of your creation. You will be missed by many people including myself.

Few people can say they were directly responible for shaping the way music sounds. Bob Moog did just that, and his genuis will be missed by not just the people that have played his instruments, but indirectly by everyone who listens to music. RIP Bob.